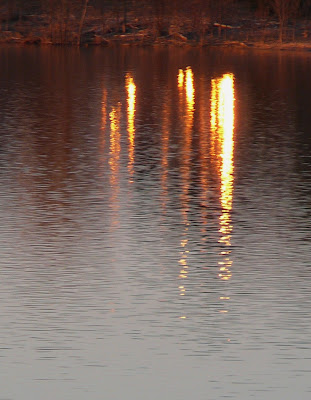 Every day at dusk, hundreds of blackbirds swoop by my house.  They come in clusters, leisurely air sailing through swirling winds, catching up and down drafts with pleasurable ease.   No matter what the weather, no matter what the season, these habitual birds travel the same route.
I don't know where they spend their day..... somewhere "upriver"  from where I live.  But just before darkness falls, they seem to breeze in through the landscape canvas sky and fliterflap on past me.  On days like this, when the soggy skies are gloomy grey, their blackness seems to hauntingly push through the thick clouds.
At first they appear like bug specks on the horizon.  Then, they loom larger and larger until they are almost close enough to touch from my livingroom, which is eye level to their flight path.  When I happen to be in this room at the right time, I stand and watch them in awe.
Tonight, it was a different feeling.  Their presence spoke a message of distress because they arrived just after the large yellow search and rescue helicopter ominously scoured the swollen river after a boat filled with 5 people capsized.  When my daughter and I first heard the loud propellered beast slowly making its way past our house, we knew deep down inside it wasn't a good sign.  Still, we hoped it was a training exercise from CFB Gagetown.   But, it continued to repeat the same pattern over and over again....... this slow motion combing of the shorelines and spring flooded islands.
Until the birds arrived.
At dusk, the loud yellow helicopter made its last turn around to return to the landing pad.  Quiet wonder echoed danger.  Then the birds swarmed in, marking the transition from day to night. Their flight path continues to be solidly ingrained in their wingspan.  With flipflapping ease, they caught the draughts of the chilly winds and seemed to mock the tragedy still unfolding.  Misty fog gripped the newly green branches and fields like unsettled spirits as the blackbirds circled once and flew off to their nighttime landing location.  Yellow streetlights on the other side of the river, blurred by the rain and fog left their streaks on the surface of the rushing water.
There is little information on this accident.  It has all happened since late afternoon when this group was travelling along the shoreline collecting fiddleheads.  To be sold at the market this weekend?  Along the roadside?   What I've read? 4 people were rescued.  One died on the way to the hospital.  The fifth remains lost to the river tonight.
A bell tolls in my heart as I think about the people whose lives have been tragically shaken by grief and loss by this split second accident.
Posted by awareness at 10:13 pm

Thank you Charles. The arrival of the blackbirds tonight spurred me to write it.

watched this news this morning...very tragic :(