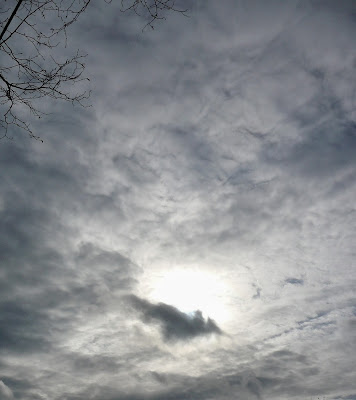 Another restless night as the wind outside whipped up storm clouded confusion. It was a persistently lonely howl on a moonless planet that managed to push in between the souls who tossed and turned as they wrestled with their dreams. The wind encased them, stripping away any sense of connectivity to one another.....like coffins separated by walls of dirt. It felt like eternity soaked into one long, long night.

Darkness finally turned into daybreak. It was a daybreak, however, without an end to the elements speaking in anger. No lipstick sunrise on the horizon, only the welcoming of grey laden skies weeping in grief with no end in sight. The wind was winning over humanity. Dominance laced with growling moans of lost ghosts demanding refuge, it wailed in pain.

She lay in bed listening to the howls caught in the abandoned branches stripped of green light and realized that her own thoughts and feelings surged inside her with as much ferosity as the wind. Thorns cut into her own clenched aches like a harmonious dirge. Without hesitation, the winds outside upped the ante slamming gusts of rain against the side of the house. Like it was responding to her thoughts, the wind challenged this very idea that this women's ache equalled the wrath of the wind. It shook the foundation of the house, splaying painful torrents against the windows. It lifted the soggy leaves and broken discards up into the air with sorrowful wailing gales from the lost souls.

"I dare you," the wind shouted....."I dare you to believe your wrath is more powerful than my own."
"I DARE YOU to show me!"


Alarmed by the very idea that the wind was speaking to her, the woman's eyes popped open. It was challenging her to what? A dual of sorts? She was too tired......too exhausted to find the energy to respond. Her internal wanderings fed by her own indecisions, anger, frustration and tears of loss and what might have beens provoked the desire to simply pull the covers up over her head and drown out the mighty boastful wind. But, she was stronger than that and never ever stepped away from a challenge. In no time, she was dressed and out the door as she pulled on her rain slicker to go for a walk into the wind.

Determined, she marched right into it's eye, up the hill to the fields flooded with new rain and muck, her soul clenched anger feeding her the energy she needed.

The wind beat her back, but she persisted to push through it's wrath as it wrapped around her body, making her coat flap behind, making her face pull in it's rapture. Her hair quickly became drenched; her shoes muddied in the mixture of cloudspills and wet clay. At first her own thoughts bellowed back at the wind..............rage against rage............sorrow bumping into sorrow......pain pushing pain..... her own torrent of tears spilled with the rain.

Why is life so difficult, she asked? Why do I have to suffer so much when I know what I want? Why can't the happiness and not the struggle be the gift from God? The wind spitwhistled through her, filling her ears with sound as she trudged up the hill. Before she knew it though, she found herself standing at the top of the hill overlooking the swollen river, angry in it's own right, flowing like a large belch of brown sludge. The canopy of trees surrounding the field were bent in mercy as their roots held on in frightful hope. She was surrounded by the nature which normally acted as a refuge. Today, however they seemed to be fighting their own battles. Or maybe, they fought alongside her?

She took it all in, surveyed the landscape held ransom to the vengeful wind, and suddenly found her internal noise was being buffered by what seemed like the groans of a thousand ghosts, in much more pain than she had ever suffered. Their pain became hers. Her pain then molded into theirs and soon she realized that though she was standing in the field defiantly all alone, she was part of the swooning forces of nature. A thought entered her muddled head.

Someone had once told her that all it takes is to look at one grain of sand and one would know the glory of creation. One grain of sand she thought, as she acknowledged the fury churning in the river down below, and the wind all around her. One grain of sand held the mystery. And with that one thought the wind turn into gusts. It stopped it's incessant bellowing and took a breath. In between the gusts, when there were minute lulls, the wind's loud voice turned into a whisper which echoed one word over and over again like a mantra ..... repent .....repent.... repent. Then it would kick back into a gale.

She heard it clearly......... repent....... ask for forgiveness......... feel the shame and guilt and ask for forgiveness. Forgiveness for what she wondered? The world blasted against me, what do I have to do with how this forsaken life has unfolded? I have tried and tried to do what is right, what I believed was my responsibility. I have lived as best as I could up to the standards expected of me, and yet I am constantly let down, diminished, abandoned, rejected.Why should I repent for God's sake??? What do I have to repent??? I just want to be recognized for who I am and not rejected or left on the sidelines.


"Humility," the wind responded....."Defiance. Not relinquishing your strong desire to control the forces instead of realizing you are one with them. A speck of sand may seem inconsequential at first glance, but it holds the mystery of all of creation. A speck of sand washed up onto a shoreline has surrendered to the elements and has allowed itself to be validated as one of many. No one is more special than anyone else. No grain of sand feels special. It is simply part of the universe, as you are. A speck of sand and YOU are one in the same."

This message brought her to her knees with realization. She was using too much defiant force while brushing back the people and the forces who were in her life to befriend her. Rather than accept herself for who she was, she constantly fought back. In so doing, she left people in her wake feeling threatened by her yearnings. Shame washed over her as new awareness pressed on her temples. "Destiny cannot be thwarted it pulsed. Destiny cannot be altered no matter how hard you try to manipulated the circumstances it pounded. You have the strength to help overcome some day, but it will only happen if you trust that life will unfold as it should. Trust the universe it tapped...."

A tentative enlightenment crept in as she fell into a heap on the ground. She thought about all the winds she chased after......all the causes she fought in what she had considered were good deeds. She thought of the people in her life who mattered, the moments in her life which mattered. The pictures played quickly through her mind and then came to a sudden halt when she finally realized that the world wasn't an "us against them scenario." Rather, it was a single solitary oneness.....the essence of all that she was made of was an accumulation of the past which was held in the ground she knelt upon. The future which was held in the hands of God. At that moment, she looked up into the skies and let the rain wash over her. A cleansing baptism.

Time lost meaning as she knelt in the thinness of the moment. A surrendering sense of peace enveloped her spirit as she spoke the humbling words....."please forgive me, please forgive me....."  The wind took a breath.  It seemed to stop for one whispering second, then returned.  Only this time, she felt its support.......

Soaked, tired and vulnerable with a twinge of empowered, she pulled herself up, turned her back to the wind and let it carry her down the hill to her home.  She couldn't wait to put the kettle on to make herself a hot cup of tea......tonic for her soul. It was time to restart the day with a new set of eyes. It was time to give thanks. It was time to let it be.....
Posted by awareness at 7:01 am 1 comment: