the affect of power on peckers.... 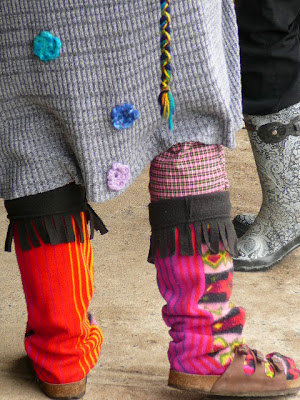 What's with the correlation between political power and the inability to keep one's pecker in one's pants?
Two very public stories have emerged this week which has foisted this age old question front and center in my thinking.   Dominque Strauss-Kahn..... not a name I had ever heard of until the news broke on Sunday that this man who runs the IMF, who had serious aspirations to run for President of France, was unceremoniously wrenched out of his first class seat and charged with rape.
Turns out this man with a prestigious CV has succumbed to his salacious urges in the past too and almost got away with it.  Now, the stories are erupting as we learn that he's on suicide watch in New York jail.  No bail for him.  Too high risk to hide out in villa on the Mediterranean out of reach from the judicial system.

I heard today that if he had been in NYC on formal business, he would've had diplomatic immunity.  Oh grand!  How sick is that?  If someone has a position that falls under the umbrella of diplomatic immunity, they can sexually assault any chambermaid of their choice and get away with it.  Doesn't it make you wonder how often this crime takes place and we never hear about it?  What a bloody sham!
And what about Arnold??? Herr Terminator Sperminator Governor??  He fathered a child with a staff person (another power person over a subordinate) 10 years ago and managed to keep it hushed up even from his wife, media, family?  Wow.  Their marriage for many years was a big blowing lie.  It makes me queezy thinking about it and my heart goes out to Maria Schriver and their 4 children.  Infidelity is a wicked kick in the gut.  For her to be living under the same roof with the staff person Arnold was boinking and making babies with is unbelievably cruel.
Henry Kissinger famously stated that "power is the ultimate aphrodisiac."  And it can impact both parties in a sexually.  Power ramps it up for both.... the one with power and the one who is lured into a tryst because of the aroma of power.  Whether its boardroom hijinks or a full court press, it doesn't seem to matter.  Politicians, business folks, athletes, entertainers, actors.......... horizontal rumbling is the preferred extra curricular activity.  Without a second thought to the consequences.  Without a blink or a wink to the people who are left in the ditches of despair and shock.
It makes me wonder........... where and when is the tipping point?  I mean, there has to be a transitional point when someone in power retains a sense of decorum and humility.  Gratitude too.  Even a belief that they are no better than anyone else.  Then, all of a sudden a line is crossed.  All values slide off their skin and what is left is a hungry drive to release their pheromes and slippery semen into the world.
Why?  Because its risky and they want to experience that heightened feeling of doing something against the rules?  Because they feel like they would never get caught, so why not?  Because they are so numb by the pressure they are under, or the lack of attention they may feel from their spouse?  I'm sure there are a million of reasons....... or should I claim them as excuses?  Cause that's what they are.  No apologies can lift the victim up out of the dredges of this reality.
Power and control are needs we all try to attain, hopefully not to the detriment of others.  To have some healthy empowerment in our lives allows us to feel a sense of balance and confidence, which in turn feeds our sense of who we ar and how we may fit in this world.  In any given relationship, however, if the power tips for whatever reason, there is an imbalance where one person has more control than the other.  From there, feelings are hurt, mixed and misunderstood.  From there, one person in the relationship tries to pull away while the other tries too hard to make it work.  This kind of scenario is ripe for disaster..... ripe for an affair.  It happens regularly, without hesitation.
I have no empathy for the parties who flagrantly do this to others and then expect the people all around them to forgive and forget.  Count on the forgiveness eventually.  Forgetting?  Doubt it!
I don't believe these activities will ever be eradicated.  Once someone crosses the line, drops all of their belief system because the urge to "drop trou " has turned into a blinding light that attracts them like moths to a back door light, they are long gone.  Flooded with such feelings, there is very little space left for rational thinking.
Personally, I want none of it.  I don't want to be in a relationship that hovers around the disrespect of another while maintaining some strange control thing. I've seen it, experienced it and I respect myself too much for this foolishness.  I don't want to be in a relationship where some man has to prove their manliness by adding notches to their belt and then TELL you about it.  And I certainly have no respect for the people in power who can't keep their peckers in their pants.
So, to all those men who are in power or who think they are, here's a little poem for you........

Don't shower me with platitudes or talk in silly rhymes
Don't offer me bouquets if they're meant to hide your crimes
Don't share with me your dreams if they're ones you do not own.
Only open-hearted sincerity is welcome in this home.
Don't gaze into my eyes without a breath of care
Don't throw missing kisses up into the air
Don't ask me questions if answers won't be received
I'll not tolerate your reeking actions of deceit.
If you can't abide by the very basic pure rules of conduct that include respect, loyalty, open communication, fairness and LOVE, I don't want a part of it that thank you very much.  You don't deserve me and I certainly don't deserve that kind of treatment.  NO ONE does.

AMEN!! Very well said, Dana. I agree with every word.

thanks Judy! It was a BREEZE to write for some reason! I should attempt more editorial-ish pieces in the future when I'm all riled up! The fingers fly faster when the issue his a nerve! :)

Word, Dana. You said it better than I ever could. I just don't get why men in power do this. Maybe it's true that power IS the ultimate aphrodisiac and they just can't control themselves.

It is the duplicitous nature of the infidelity - particularly Arnie's - that I find hard to swallow. He lied to her for 10 years, maybe longer. He mustn't really have had much respect for her as a person to do that. I hope she takes him to the cleaners. It is very sad.

well that lays it out very clearly!

( i am so intrieged about those leggings....our city doesn't appear to have 'em!)