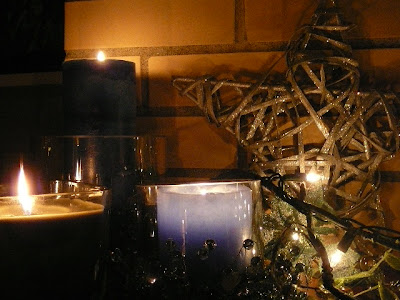 As usual, I was awake this morning before the light emerged over the horizon.  I love that time of day for so many reasons, all of which unfold from a wakening stretch, a new breath, a re-emergence of sight and sound.  Intuitive sounds.  Familiar surroundings.  A friendly stirring of security gravitating from the grounding of my roots.  My senses, accompanied by new day realization lead me to wonder..... "What will become?"

While the kettle revved up,  I stood by my living room window to look out at the view I am blessed to call my own. At first, I could barely catch a glimpse.  Then, the sky began to lighten and a sliver of dawn peaked up over the curtain as the liminal transition evolved.  In front of me.......gentle sloping farmland, barns and homes under fading streetlights; evergreenery and leafless maples, birch, oak..... snow-nestled limbs and branches; and the river.  Oh, the river..... flowing constantly under the film of ice.

I can't find the words to describe the impact the Saint John river has had on me over the years I've lived in this home. Especially during the most recent years when I have been stuck in emotional ruts up to my chinney chin chin!  Reassuring, challenging my thinking......... demanding that I stop and look and listen to what is happening inside me. Embracing. Inviting me to look outward to wonder what is happening inside others. It makes me feel like I'm not alone, even at the loneliest dips.  It ties me to a community, to a sense of continuity especially on days when nothing seemed to connect.  It invites me to belong to a bigger world beyond ........ beyond.  It flows east ......... like my thoughts of becoming ....... towards the bed where the sun sleeps and rises again.  Rise again.  And again.  I wonder.  How it heals.

This morning, my neighbourhood woke up to a wonderland of winter's finest.  40 centimetres of snow fell in one day.  All that was left was the wind tunnelling down the river like logs in a chute. Howling with such brutal strength reminding with every menacing whistle, it's power was serious enough to knock out ours.  It was a stark contradiction to the tranquil vista in front of me.  Off to the right, birds began to emerge from the distance.  Jet black...... poking through the openings in the sky.  Dozens and dozens, all the same colour dispersing into the howling windy gusts.  Gymnastic tumblers with wings!

The "dawn and dusk" birds, who migrate on the same flight path every day from the University in town to somewhere up river and back again, were my entertainment as I welcomed a new becoming.  I hadn't noticed them recently.  My attention always seemed to be elsewhere.  But, there they were again.  I stood in awe as they pitched and plummeted in all directions, as they fought to find sleeves of windpockets to move forward  to their eventual destination.....be-yonder.

My first impression of being entertained by them quickly morphed into recognizing the struggle they were exhibiting as they defied the elements that pummelled their attempts to proceed.  Somehow, these little black birds managed.  Despite the stormy odds, they were succeeding.

How?  I watched more closely.

Up and down they soared.  They flew in sideway zigzags with no planned pattern or flock to help them. Every bird was on their own to figure out how to take on the wind, how to tackle the journey.  The idea of staying put rather than taking flight was not a consideration.  Individually, they fought back with surges of energy when the timing was right, and then would tap into a surrendering glide when the gale opened up like a slide. One wing flap at a time.........  It must've been so exhausting!

On a calm day, these birds fly in scores of dozens, like a crowd emerging from a subway exit during rush hour.  Today, there was no mirage of solidarity.  Despite what it looked like, however, I believe they instinctively garnered motivation from one another to make headway.  Just like humans.  We may feel like we are alone against life's elements.  We are alone in the ultimate struggles........ no one can do it for us.  But, we too instinctively gain strength to claw forward by the people in our lives and by the stories we hear of others.

I have flown through so many storms this year.  Some larger than others.  For a period of time, it felt like a storm a week.  It took its toll on my energy and my health.  There were days when exhaustion would hit me like a wall of wind and I couldn't find one of those windpockets to slip into.  On the most trying days, I went silent.  My writing dried up.  I was afraid to write because I didn't know how to catch the words as they scattered in sideway zigzags.   There were too many of them, all tied to too many stories.  I couldn't sit still. I couldn't settle down.  Too much drama. So much that it peaked at embarrassing levels and depleted my resources.   Every time I thought the storm was over, another one landed overhead.  For months and months.

This morning, a new thought emerged as I watched the birds.  The year is over.  A new one is about to begin.  I have reached a destination despite the obstacles, in spite of myself!!!  Humour intact.  Health restored. A roof over my head.  Two amazing kids who have had their fair share of shocks and storms this year as well.  Enough radiation to painfully peel the skin off my breast and to leave a constant warmth as a reminder.  Appendix-free. Loved. An unpredicted heartbreak that left me on my knees with a continuing deeply felt lesson on loneliness. Confidence drained. Confidence renewed.  Divorced with a few new scars on the inside and outside.  Free.

Welcome 2013.  Let it unfold in the glory of becoming!