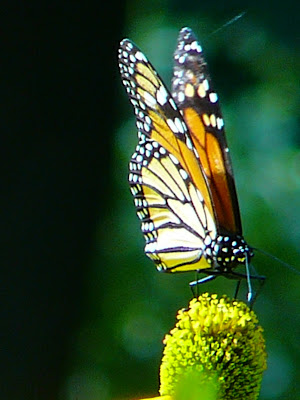 It used to be that the words flew out of my fingertips faster than a lightflicker. Now, if I am able to capture a whisper of a thought, I'm lucky.  Has my muse shrivelled down to a mere facebook status update?  Has it flown the coop and turned itself into a fainting Twitter tweet?  It seems so.  But, I think it has just taken a very long hibernation........ one that  simply could not be jousted, jiggled, or jibberjabbed awake.  My muse went dormant for its own unexplainable reasons.

I know my reasons.......... I let it slip.  I let the time that I had dedicated to writing slip into the vortex of lost opportunities.  My meanderings were left unharnessed.  My wanderings unwritten. Then, the meanderings and wanderings grew as I grew farther away from this beloved blog space.  They grew and grew and grew like choking weeds............ so big and lush that I didn't know (still don't) how to tame them enough to capture them creatively.

So, I have decided to start to chew on them. Those darn wordy weeds.  As a way to reflect.  As a tact to understand all that I have seen, heard, felt, experienced this winter.  This year actually.  I've also tried to figure out what has truly stopped the outpouring of writing I so enjoyed.  Are the feelings too sharp?  Are the events too many?

A big lesson I've learned this year is what it is like to feel the intensity of loneliness.  As someone who has the blessing of having many caring people in my life, and as a person who is surrounded by others day in and out in my work, it seemed to me unfathomable that I would ever feel so lonely.  Yet, I found myself getting in my car on Friday after work many times feeling a sense of foreboding loneliness that literally knocked me flat.  Flat energy, flattened ideas, BIG unrelenting tears ....and a lack of confidence to do anything but sit it out.  Even when I was invited to attend an event, go to a friend's house, go have a glass of wine with a friend, try yoga, go drumming, attend church........ ANYTHING.......... I couldn't push myself up and out the door.  Even though in my head it would have been the best thing to do......... I couldn't do it.  Instead, I wallowed in all the anxious things that overwhelmed me rather than put myself in a situation that had the potential losing control over my very raw emotions.

Loneliness is the Master of depression.  Together, they are the S&M of mind fucking.

Having admitted that, I also have to admit that I frigging earned it. Wave upon wave of grey sky storms came  and went......... all of which I had no control over, except to respond and help my little family respond when I could. Many days, it left me running for cover.  To sit in the loneliness. Silent.  Like millions of others.  As much as I felt sorry for the lonely people out there, I felt a kinship too.  It is a strange planet to visit. Lonely Planet.  But, I believe, and did so as I experienced arching my back into it, that it was my turn to feel it, breathe it, live it..... knowing full well that it would eventually be conquered by new light.  With help.

In the meantime, there was no praying.  It was not in me. I didn't attend church services. I didn't complete any tasks around the house except if watching all of the Storage Wars episodes a task then I completed something.  Stillness didn't visit, though I sat quietly.  It was more like a chaotic rumbling inside that played games in my head.  Drama without end.  Tears that seemed eternal.  I could not concentrate except when I really had to in my job as a counsellor. I put ALL my focus on counselling.  As much as I starred in the role of Wounded Healer, I did it well!   Then, when I came home, I was drained.  Completely.  I just couldn't fuel up fast enough.  Christmas was a blur.  I was too exhausted to fully take part, though I did the best I could.  Then, I crashed.  For a week and looked after myself.

I pushed back and at times sat back.  Every week, I forced myself to attend a guided meditation, Since I couldn't seem to meditate on my own, this helped me on so many levels........ it has become a place of safe processing, of re-learning how to breathe, how to develop self discipline, of letting go of some of those emotions caught in my gut and in my muscles.  It helped.  It carries on.   Talk therapy helped too.  With a person whom I admire and trust.  No judgement............. just a chance to purge my unsolicited thoughts and feelings........... a way to regain my zip.

A turning point came just before Christmas when life's events and worries were peaking............. I was in such a state that my therapist sat me on the floor.  She sat down behind me and put her back to me.  Then she told me to "take her energy........."  What a gift!!!   I sat there for a long time just breathing....... catching my breath.......... trying to rid myself of the loneliness that had settled in my heart.   It was the best gift I received last Christmas.   Another person's energy when I needed it the most.  When the session was just about over, she said to me............ "when you pull away from me, inhale deeply.  Take it all......."  So, I did.  With gratitude.  I saw her at the grocery store a couple of days later....... still feeling the renewed energy she had gifted to me and strolled right up to her and gave her a hug in the check out line.

One day in February, I woke up and things had subsided.  Little by little, ideas began to push thru the winter frost.  Pent up energy knocked on the door. Out of the blue,  I had a call from an acquaintance who offers yoga classes.  I had hoped to sign up a full year ago and it never worked out.  She asked me if I would be interested to start right away.  I said yes as I contemplated on how nothing is really "out of the blue."

Yoga.  I don't know why I had never tried this before.  But, as I stretched and followed her directions on that first night, I felt like it was a natural process I had a kinship to.  Someone asked me what kind of Yoga it was.......... I answered "good Yoga".......  I have no idea.  Like my way of worshipping and of learning about my faith, it has no category.  It is just good for me.  I guess.  This Yoga fits me.

At the end of the first session, where I was taught to massage my limbs and feet, as I learned the basics of stretching and moving, it ended with a quiet meditative comforting moment of laying on a mat in front of a burning woodstove.  As I laid there with a sense of peace I hadn't felt in over a year, I realized that it was the first time I had felt connected to my body. My head and heart was reconnecting to this body of mine that had  betrayed me last year......... that went through three surgeries, a bunch of radiation, and then a stomach bloating after my appendix was removed that went on and on and on for months due to stress.

This body I was so angry with began to cooperate with my head and heart.  The first time.  I also realize that my breast, which is intact and only has a small scar had stopped radiating heat.  It had been a whole year since radiation.......... since I laid in that same pose on an altar in the hospital.    It all came flooding back to me.

Tears silently slipped down the sides of my face........ cleansing and rebirth had begun.  The loneliness, which I had originally assumed was caused by not having a partner/lover in my life.......... being alone in this world with too many overwhelming tasks to attend to did not formulate from those reasons. It had to do with the inside of me.   It was because I had lost confidence in my body working properly.  I had disconnected from my self.  Lost my belief that I was beautiful.  Lost my belief that I was worthy and loved.

Once it started lifting, I could feel myself hitting my stride again.  I'm more clear headed.  I'm ready to tackle the outside world more often.  I'm ready to lead others through meditation, through their own process of healing.  I'm back at church attending services I want to be a part of.  Ideas are not so wieldly.  Instead, they are unravelling from the weeds so I can pluck them out readily.

Loneliness may be a place in our psyche where our personal narrative becomes entangled in missed opportunities.  It may be a state of mind that dances with despair.  But, it is also a place where creativity, new strength and new positive narratives percolate.  To know it doesn't last allows one to sit in it for a while..... and wonder........... what is it all about?

As I write this, we are changing the clocks............ springing forward into the upside of old man winter.  Its a good time to empty ourselves of that wind whistling lonely to leave a deep pocket to be replenished with love  and the desire to plant a new garden.

So lovely you see that you are back again. I have missed reading your words … the thoughts, musings and questions that both provoke and tease. Time heals … you have found strength after many twirling tilt-a-whirls …. it has brought you back to your writing. I am so glad!

Great that you have taken up yoga … funny … I called about yoga classes last week at a studio in the woods that I drive by every day. I feel drawn to it …. must follow this instinct and not let it pass like so many things that speak out and want to be heard, yet often go ignored.

Yes … I am ready to spring forward!

good job Your blog contain Thanks lot for this useful article, nice post